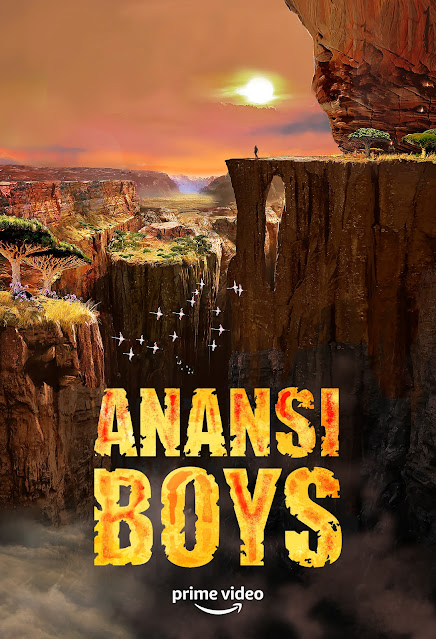 And I cannot tell you how happy I am to be making it, and making it in the way that we're making it.

Anansi Boys started in about 1996. I was working on the original Neverwhere TV series for Lenny Henry's film company, Crucial Films. 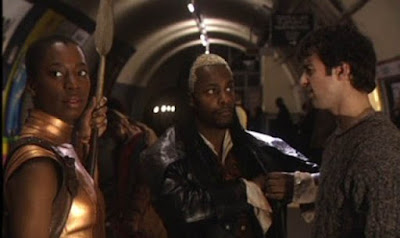 Lenny and I went for a walk. Lenny grumbled about horror films. “You'll never get people who look like me starring in horror films,” he said. “We're the hero's friend who dies third.”

And I thought and blinked. He was right. “I'll write you a horror movie you could star in,” I told him.

I plotted one. I tried writing the first half-dozen pages of the movie, but it didn't seem to be right as a movie. And I was beginning to suspect that the story I was imagining, about two brothers whose father had been a God, wasn't really horror, either.

I borrowed Mr Nancy from the story I had not yet told and I put him, or a version of him, into AMERICAN GODS.

In 2002 I was having lunch with my editor, and I told her the story of Anansi Boys, and said it was probably a novella. She waved her fork at me. “That is a novel,” she said, very certain. I was impressed enough with her certainty that I wrote the novel.

The creation and publishing of the novel is documented here on this very blog. Here's a useful bit, explaining its relationship to American Gods, and also explaining what Anansi Boys is:

(For those of you who don't want to click, I talked about describing it thus:

My new novel is a scary, funny sort of story, which isn't exactly a thriller, and isn't really horror, and doesn't quite qualify as a ghost story (although it has at least one ghost in it), or a romantic comedy (although there are several romances in there, and it's certainly a comedy, except for the scary bits). If you have to classify it, it's probably a magical-horror-thriller-ghost-romantic-comedy-family-epic, although that leaves out the detective bits and much of the food.

Which, oddly enough, is still a pretty good description.)

The book came out and was my first New York Times Number One Bestseller.

(This is the Ukranian cover.) 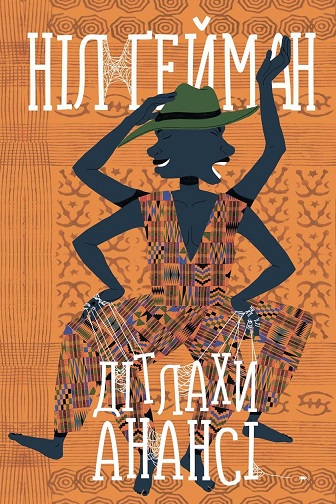 A top Hollywood director wanted to buy the rights to Anansi Boys, but when he told me that he planned to make all the characters white, I declined to sell it. It was going to be done properly or not at all.

And then, about ten years ago, two things happened at the same time. Hilary Bevan Jones, a producer who had made a short film I had directed (called Statuesque) mentioned she'd love to make Anansi Boys as a TV series, and a man named Richard Fee, who worked for a company called RED, spotted me eating noodles in a London noodle bar, waited outside so he didn't seem like a stalker, and told me how much he loved Anansi Boys and that he'd love to make it into television.

I loved the TV that RED had made, loved Hilary and her team at Endor, and, unable to decide between them, suggested that they might be willing to work together. They both thought this was a good idea.

Work started. Somewhere around 2016 I agreed to work on it to help it get made, but we all knew that we would have to be patient as I was writing and making Good Omens. And when Good Omens was in post production we began to move forward.  Amazon had loved making Good Omens, and were blown away by the viewing figures and reaction to it, and wanted to make more things with me, so Endor and Red now had a place to make it for. We put together a fabulous team of writers -- Kara Smith and Racheal Ofori and Arvind Ethan David, not to mention Sir Lenny Henry, who came on board both as a writer and as an Executive Producer to make sure that the soul stayed in it. (I'm writing the first and the last episode).

Douglas Mackinnon agreed to co-showrun it with me, because I knew I never wanted to be the sole showrunner of anything again and after the Good Omens experience I would trust Douglas with my life and (which actually may be more important) with my stories. We planned to shoot it all around the world...

Paul Frift had been the producer of Good Omens during the South African leg of the shoot, and was indomitable, so we were very happy when he agreed to come on board as our producer.

And then in 2020 Covid happened. The Prime Directive of making Big Budget International television suddenly became “Don't Travel and Especially Don't Travel All Around The World. We Mean It.”

Douglas came up with a Plan to bring Anansi Boys to the screen that was audacious, creative and brilliant. All we needed to make it work was the Biggest Studio in Europe and access to an awful lot of cutting edge technology.

The biggest Studio in Europe happens to be in Leith, outside Edinburgh.

Before Covid, the plan had been first to make Anansi Boys, then immediately to make Good Omens 2. (Good Omens 2 was going to be shot in Bathgate, outside Glasgow.) That was the plan we were working on through most of 2020. Then, in September 2020, Douglas and I got a call from Amazon. “We've got good news and complicated news for you,” they said. “The good news is we are greenlighting both Good Omens and Anansi Boys. The complicated news is... well, how do you feel about making them both at the same time?”

Hang on. I want to do that again in a bigger font.

I'd loved the pilot episode of Star Trek Picard, and talked to Michael Chabon about the director, Hanelle M. Culpepper, and he gave her a rave recommendation as someone who could tell a story and stay in control of the technology. We reached out to her, sent her the scripts and the novel, and she loved the project. Hanelle is going to be our lead director, and will direct two episodes.

Hanelle, Sir Lenny Henry, Hilary Bevan Jones and Richard Fee are executive producers, as are Douglas and I.  Hanelle,  Jermain Julien and Azhur Saleem are our three directors.

We will start to announce the cast soon (it's thrilling).  (The crew are, to me, just as thrilling.)

(But I'll give you one clue: one of our cast members was on a public event with me at some point in the last five years. The first thing she said when we met backstage was that her favourite book was the audiobook of Anansi Boys, read by Lenny Henry. And when I told her that there was a part in the book I'd originally written with her in mind, she was overjoyed. So when it became a reality, she was the first person I asked, and the first to agree.)

(The Anansi Boys image above is by Michael Ralph, our amazing production designer.)